Growing up, there were two things that I loved to watch more than anything. WWE and Hindi movies. Like everything I am interested in, my love bordered on obssession. They gave my young heart profound joy, but of course growing older and no thanks to Google and Wikipedia, the memories of my childhood loves have been ruined.

Today, we are going to talk about WWE
I first fell in love with the “sport”, following a family trip to a relative’s home. They were watching a retirement match between Macho Man Randy Savage(with Sherri on his side) and the Ultimate Warrior. After Macho lost the match and was passed out on the floor , Sherri began to hit him in anger. Out came a lady from the crowd who threw Sherri out of the ring. Then came the most emotional reunion ever. I cried. That was my first introduction to Miss Elizabeth.

Most moment ever. You can check it out on Youtube.http://www.youtube.com/watch?v=34UiNWiNFoc

Then I became a fan. I watched every episode, looking out for the loud brash Macho Man and the soft beautiful perfect Miss Elizabeth. Their contrast intrigued me. Eventually, I began to watch the matches.(yeah, I used to skip the matches except theirs) The proposal and the marriage were phenomenal. 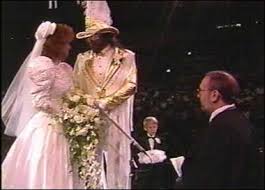 In retrospect, if I was watching WCW, I would have saved myself from heartache.

Fast forward to adulthood. After a few years off, i rekindled with my childhood love.Yes by now, I knew wrestling wasn’t real, but mere kayfabe. That hurt, but not as badly as what I found out.

1st shocker – My favourite love story was a sham. Not only were they already married at the time of the dream wedding, but they had divorced. She has remarried and divorced again and then ended up with a loser wrestler who beat her.

2nd shocker – My soft beautiful perfect Miss Elizabeth had passed away at the ripe age of 42 in 2003. A medical examiner listed the cause of death as “acute toxicity,” brought on by a mix of painkillers and vodka. Her mother didn’t allow any wrestler at her funeral
On May 2011, Macho Man Randy Savage who had since remarried, also passed away from a heart attack he suffered while driving. He was 58.

I know all love stories don’t have happy ending. Who knows the prince might have cheated on Cinderella with one of the step sisters….Snow white may have eloped with one of the dwarves. Life can suck sometimes. I still watch WWE but not with the same intensity.

Cheers to the first couple that introduced me to Love and the Magic of wrestling. May you guys work out in the next life.

watch the tribute video at http://www.youtube.com/watch?v=T4_Mvj4-XMM

place for all things lovely / new post every Monday

BY GRACE THROUGH FAITH

I watch obscure (often bad) movies so you don't have to

Diaries of an invisible black girl

Weight loss, beauty secrets and the road to your full transformation.

Life is better in red

Everything you love about Professional Wrestling

I don't write, I touch without touching.